Boost circuit not only can boost, but also requires less components in the topology itself, which is beneficial to improve efficiency, and is very suitable for applications that need to supply batteries to LEDs. Analog dimming and digital dimming of LEDs were achieved through the application of innovations to the controller LTC3783. And the designed system can work normally for LED arrays with power from several watts to tens of watts, batteries with terminal voltage range from 6-36V, and maintenance of the product - need to replace the LED or when the battery needs to be replaced, As long as the above requirements are met, the system can operate normally and stably without replacing the circuit module.

There are many ways to drive an LED, and the easiest way is to connect the LED in series with the current limiting resistor and then supply it from a voltage source. The advantage of this type of drive is that the circuit is simple, but there are also many drawbacks. The first is low efficiency, the step-down resistor consumes a lot of power, and may even exceed the power consumed by the LED. Secondly, the stable voltage capability is extremely poor, and the VI curve of the LED has a negative temperature characteristic. As the junction temperature increases, the flow The current through the LED will be larger and larger. Therefore, if the drive current is not controlled, the LED is easily burned, and even if it is not burned, the life will be greatly shortened. Therefore, current control is required when driving high power LEDs. In addition, the illuminance of the LED light source is directly related to the current, so the illumination current of the LED is controlled and the illuminance is also controlled.

The principle block diagram of the system is shown in Figure 1. The power supply is a lead-acid battery, and the load is an array of LEDs. The LTC3783 is used as a controller to implement PWM control. This circuit is designed to simulate dimming and digital dimming of LEDs simultaneously. And the system can work normally for LED arrays with power from several watts to tens of watts and batteries with terminal voltage range from 6-36v, so that when the product is to be repaired - need to replace the LED or need to replace the battery, as long as it meets The above requirements, the system can work normally and stably without replacing the circuit module. 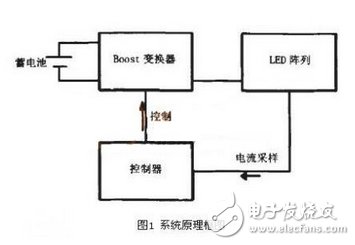 Due to various limitations such as heat generation and heat dissipation technology, the power of a single LED cannot be made as large as a conventional light source. A LED with a power of 1w is a high-power LED. In practical applications, an array of multiple low-power LEDs is usually used to meet higher illumination requirements and achieve low cost, as shown in FIG. 2 . 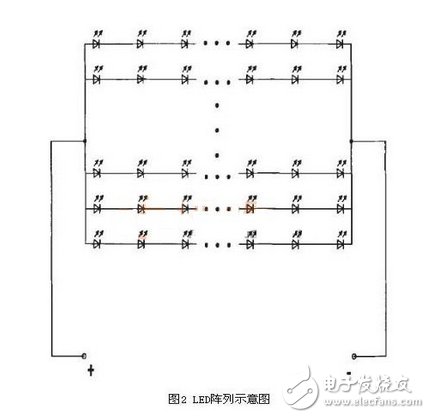 There are another significant advantages to using LED arrays. We know that LEDs may be shorted and broken due to certain faults. When a string, the LED in the branch branch is short-circuited, the other LEDs in the branch can still work normally. Although the current through the LED may rise, due to the large number of LEDs, the rising current is not large, and the rising current does not exceed the allowable operating range of the LED. When an LED in a series branch is broken, the string of LEDs is extinguished.

However, since the array is composed of a plurality of LED strings, other LED strings can still work, and share the current in the extinguished LED string, but since the LED has more branches, the rising current is not large, and the rising current does not exceed The working range allowed by the LED. Therefore, it is obvious that the LED array has relatively higher stability and reliability. 1. Moreover, for a certain number of LED arrays, when the number of branches is matched with the number of LEDs in the branch, it will be more advantageous to enhance the LED. Reliability and stability of component operation.

In the experiment, an array of 8 strings of 20 LEDs per string and an array of 12 strings and 12 LEDs per string were fabricated. The LED used is an O.1w bullet-shaped LED with a rated forward voltage drop range of 3.0-3.3V and a rated forward current range of 10-30 mA. The LED design is operated at 20 mA in the experiment, which can reduce the heat dissipation. And there is enough current margin when the LED has a short circuit fault.

Industrial All In One PC