Wearable Wireless Network In the wearable computer system described above, the hardware devices are mainly connected by a communication cable, and the operating platform used is also based on a wired device. Although this kind of system has its applicability in certain occasions, its shortcomings are obvious: First, it is not flexible enough. Because of the "hard" connection of communication cables, it is bound to affect the activity space and amplitude of the user's body, which is necessary in some applications, such as physical exercise.

(3) It is possible to perform distributed control. This is because each communication terminal has certain computing processing power and storage capacity (and with the development of very large scale integrated circuits, the performance in this aspect is bound to be further improved).

(4) More humane. The user can select the appropriate primary communication device to control the entire network according to different applications, convenience levels, and personal preferences.

It can be seen that the wearable wireless network should have better applicability and wider application prospect than the wearable computer, and it can be developed on the basis of various existing wireless local area network technologies. Since the existing wireless LAN technologies are relatively mature, they have obvious advantages in development difficulty and development cycle compared to wearable computers.

2.1 Network Model Currently, technologies suitable for building wearable wireless networks include Bluetooth and ZigBee. Both wireless technologies belong to the IEEE 802.15 family and operate in the ISM band. The differences between them are shown in Table 1-1 below. Because they are completely consistent in networking, the wearable network models built with them are basically the same.

Table 1-1 Comparison between Bluetooth and ZigBee

The networking methods of Bluetooth and ZigBee can be divided into three forms: star network, peer-to-peer network and hybrid network [2]. Wearable wireless networks built with Bluetooth and ZigBee technology should be in a hybrid form, as shown in Figure 2.1. It is a loose Ad Hoc network that fits the needs of wear. 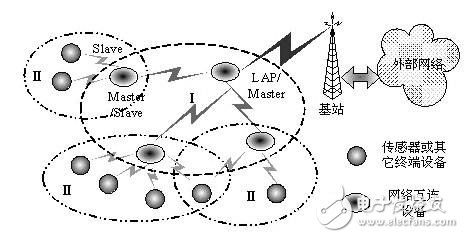 In the above two types of wearable wireless networks, devices in the entire network can be classified into two basic types according to different roles:

Network interconnection equipment: Network interconnection equipment is not only responsible for forwarding data transmitted from terminal equipment, but also must manage and maintain each level II network. At the same time, a new network must be formed between these interconnected devices. Therefore, network interconnection equipment should have a certain storage capacity and data processing capabilities. In theory, each Master can act as a LAP, but in reality there is no such need. In this model, the LAP acting as a gateway acts only as a member of the Level I network and is responsible for managing and maintaining the Level I network, not as a base station for Level II networks. The purpose of this is to prevent the same device from playing too many roles, which will increase the complexity of the device. Devices that can act as network interconnection devices include PDAs, GPS, headsets, MP3s, mobile phones, and PTT (Push To Talk), among which mobile phones and the like can also act as gateways for contacting external networks.

Regardless of the wireless technology used to build a wearable wireless network, basic service and management capabilities should be provided, including internal data transfer, web-based services, and network management services.

Typically, only devices in a Level I network have the requirements and conditions for Web access. Web access should be done through the gateway, mainly considering the security of the network. After establishing a connection to a Web site, you can consider using the C/S model to provide services. These services should include FTP services, E-mail services, and audio and video services. For voice services, VoIP technology can be considered.

The task of network management is to maintain reliable operation of the entire network. In order to establish communication connections between devices and maintain the management network, it is common to assign logical addresses to devices in the network. Before IPv6 is not enabled, it is difficult to make the actual IP address the logical address of each communication device. However, the device acting as a gateway should have an actual IP address, which is good for web access. Of course, if necessary, you can also consider the gateway device as a DHCP server, but this will obviously increase the workload of the gateway device. In fact, each wireless technology's own address addressing and allocation scheme can also be utilized.

To detect the activity status of devices inside the network, broadcast messages can be sent to the entire network or to a specific Level II network. The entire network is diagnosed based on the feedback, so that the user can be alerted in time. Of course, broadcast messages containing specific network device addresses can also be published, which typically occurs when the message publisher needs to establish contact with the device.