Case 1 When Chengdu International Shuangliu Airport was rebuilt at the airport, more than 100 sets of thyristor inverters of more than 75 kW were brought by foreign countries with the complete set of equipment. The distribution system was 110 kV incoming line, and the main transformer 10 kV power distribution and distribution system It is equipped with leakage protection. Because the input current of the thyristor inverter contains high harmonic components, the 5th harmonic of the input current reaches 20%, the 7th harmonic reaches 12%, and the total harmonic current distortion is about 30%. The integer multiple harmonic current of 3 is the zero sequence current, and the zero sequence currents are superimposed on each other in the neutral line.

The zero sequence makes the neutral current in the power supply system large. When there is a large harmonic current on the neutral line, the impedance of the neutral conductor can generate a large neutral voltage drop under harmonics. This neutral line voltage drop causes interference in the common mode, and some neutral lines. The current on it will also exceed the phase current. Because it is a cable power supply, the distributed capacitance is large, and the high-order harmonics are low-resistance, so the leakage current increases sharply, so that the leakage protection often trips incorrectly. The airport management staff and the Chengdu Power Supply Bureau have improved the leakage protection setting value, and the leakage protection does not trip, but the upper level differential protection jumped, and the accident with the system was broken. After consultation with the foreign company, the GTO inverter was replaced by the IGBT. Multi-frequency inverters, harmonics meet national standards, leakage protection, differential protection are implemented according to national standards.

Case 2 With the wide application of various types of variable frequency energy-saving equipment, the problem of harmonic pollution in the Shaoxing area of â€‹â€‹Zhejiang is becoming more and more serious, which affects the quality of power supply. In 2005, the main transformer differential protection trip occurred in the 110 kV Dahe Substation. After the search and analysis, it was found that the 5th harmonic of the main transformer current of Dahe Substation reached 10%, and then the 10 kV outlet was tested and found to be 5 The 5th harmonic current of the 10 kV line exceeds 10%, and the 5th harmonic current of the Anzhong line with the largest harmonic current is 20%. The same is true because the harmonic current is too large, and the distribution line is a cable, the distributed capacitance is large, the harmonic current is low impedance, the leakage current exceeds the setting value, and a trip accident often occurs. With the agreement of the power supply bureau, the setting value is increased, and the leakage protection does not jump, but the upper level differential protection trips. Because the harmonic current in the system is ubiquitous, the electrical equipment failure caused by harmonic current is increasing day by day, and the potential hazard is large, which is easy to induce an accident. After investigation, it was found that the Sino-foreign joint venture Friendship Special Steel Co., Ltd. in the supply line has a new annual output of 200 kt stainless steel strip steel in the smelting process, especially during the melting period, random and large fluctuations in reactive power will cause The fluctuation of the power supply bus voltage, its main harmonic source equipment, including 3 20 t electric arc furnace, 2 25 t refining furnace. By evaluating its voltage fluctuations and flicker, the fluctuations are severe and constitute flicker interference. To this end, during the installation of the user's power distribution equipment, the user is required to install an SVC compensation device with a response time of about 10 ms, and the TCR part capacity is 10 000 kvar.

After the device is put into operation, the indicators meet the requirements of national standards.

The main circuit and equivalent circuit of the inverter connected to the power distribution system are shown in Figure 1.

The frequency converter is a harmonic current source, as shown in Figure 2. Calculate the harmonic voltage of the victim point in the equivalent circuit 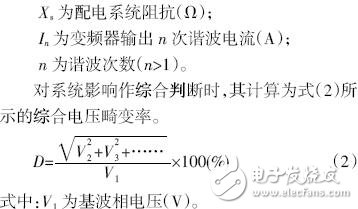 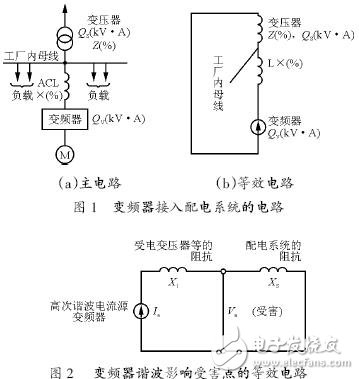 Case 1 The Chengdu Shuangliu International Airport Terminal is equipped with more than 100 thyristor inverters of more than 75 kW brought by foreign sets. The harmonic current is very large. Since the distribution line is cable-powered, there is distributed capacitance, such as As shown in Figure 3, because the impedance of the higher harmonic capacitance is small, abnormal current flows in, which often leads to overheating of the cable. The leakage protection device often trips according to the leakage current of 20 mA. The airport operator will set the leakage protection with the power supply bureau. The value is improved, although the leakage protection does not jump, but what happens if the real leakage causes harm to the person? Although the personal injury of the unit was not caused, the tripping of the differential protection of the busbar caused by the large harmonic current caused the system to be dismissed, resulting in a larger blackout.

3 The key to using the inverter is to control the harmonics.

3.1 Setting up an AC reactor 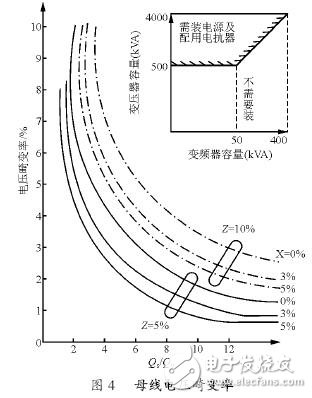 When designing an AC filter, it is necessary to know the amount of generation of higher harmonics (including non-theoretical harmonics) and to grasp the operating conditions of the system (variation of system impedance and filter transition state accompanying transformer inrush current), it is necessary to set in each Calculate in the environment. 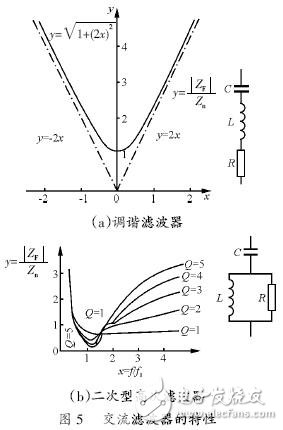 As mentioned above, for large-capacity thyristor inverters, it is possible to multiplex the rectifiers, that is, to divide the power-side rectifier into two, and to install Y, yd or D, yd winding transformers on the input side, and to suppress the flow to the power supply by multiplexing. The higher harmonics of the side. Because the rectifier needs to be separated, it is not used in general-purpose inverters.

When a plurality of inverters are provided and a dedicated transformer is provided at the input thereof, as shown in Fig. 6, the phase of the input current is shifted by the input transformer, which is also effective for suppressing harmonics.