Germany is not only a country of poets, thinkers and composers, but also a wealth of scientists, engineers, technicians, and is known worldwide for its cutting-edge manufacturing, especially machinery and automotive. This is a nation of equal importance to both rationality and romance.

The once-famous "Made in Germany", in the era of British industry dominates the world, resolutely rises and replaces it. At present, among the 31 departments of the machinery manufacturing industry, 17 of them occupy the global leading position, and there are 27 departments in the top three. The German manufacturing industry is known as the â€œfactory of the factoryâ€ and is the manufacturer of the world factory. These performances are not accidental, but have profound cultural reasons. China is becoming a "manufacturing power" in the world, but it is not yet a "manufacturing power." Our key manufacturing equipment is still dependent on developed countries such as Germany.

In addition, we introduce German equipment, components and processes, but we cannot produce the quality of original (Made in Germany) products. â€œMade in Germanyâ€ has become an important reference for â€œMade in Chinaâ€. The rise of China's manufacturing industry must study and introduce the cultural factors behind "Made in Germany" and overcome the negative factors of modern nationality and carry out a cultural re-engineering of manufacturing.

Product characteristics made in Germany

In China, the most connected city with â€œMade in Germanyâ€ is Qingdao, which was once a colony of the Far East in Germany from 1897 to 1914. Mentioning this history, the Chinese people are accompanied by hidden pains, and the Germans are accompanied by embarrassment. This history has objectively promoted the industrial development of Qingdao. Today, Qingdao Beer, Haier and other Qingdao brands also carry the cultural connotation of â€œMade in Germanyâ€.

According to the "Qingdao Morning Post" report: In 2006, German businessman Henry Ann came to Qingdao to invest in the production of large gears. Before him, the Henry family had three generations of gear production history. In June 2010, Henry Annâ€™s 80-year-old father came to Qingdao. When the father and son visited the Christian Church in Jiangsu Road, they walked into the tower and saw that the church clock was still in normal use.

Henry said: "When we saw the word 'JFWEULE' on the clock, my father was very excited, because this is a watch manufacturer that was famous in Germany more than 100 years ago. More than 100 years ago, the gears of JFWEULE watches were We Henry is home to supply." The gears that guarantee the normal operation of the clock are small and large, a total of more than 20, each of which is designed as designed by the designer 102 years ago. The church staff said that the watch has never been repaired for so many years, that is, the gears are applied to the gears every three or four days. Henry said: "According to the current situation, these gears have no problems, and can be used for another 300 years. When it is really necessary to repair, I am afraid that my great-grandchild generation."

Not only that, but the brewing equipment, motors, gearboxes, labeling machines and wheat selection machines made in Germany 100 years ago by Tsingtao Brewery can still be used. The underground drainage system left by the Germans 100 years ago in the old urban area of â€‹â€‹Qingdao, the rain and sewage are separated, the design is reasonable, no matter how much rainfall can run normally. The craftsmanship of the German Government House, the chandeliers and other details of the craftsmanship are as magical as the commentators today talked to the visitors, causing the audience to burst into trouble. 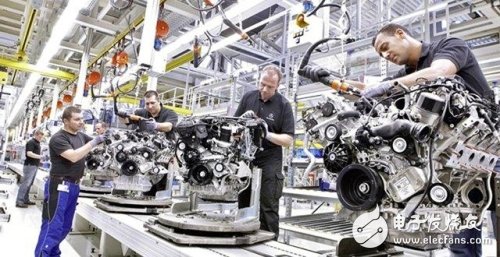 The six connotations of "Made in Germany"

No matter how many years ago, church clocks, brewing equipment, underground drainage systems, buildings and furniture, or today's Mercedes-Benz, BMW, and Zwilling knives, "Made in Germany" has the following four basic characteristics: durable (Haltbarkeit), reliable ( Zuverlaessigkeit), Safety (Sicherheit), Precision (Praezision). These touchable features are the manifestation of German culture at the material level, while the implied one is the unique spiritual culture of â€œMade in Germanyâ€.