In other words, the nature of the battery itself is "essential". If the battery technology has made great progress, the battery life problem will be solved. But battery technology is limited by physical and chemical boundaries, and it is not that simple to make progress. Therefore, the rapid charging technology of major mobile phone manufacturers mainly refers to innovations in charging devices.
Fast charging technology on the charging device side <br> Both OPPO's VOOC fast charging technology and Qualcomm's Quick Charge2.0 technology belong to the charging device's fast charging technology. The essence is: under certain restrictions, as far as possible Ground to increase the voltage/current reaching the battery.
Certain restrictions: For mobile phone batteries, the restrictions are mainly safety conditions and durability. The so-called safety means that the charge is too fast and does not explode; the durability condition means that the charge is too fast to attenuate the life, but not to decay too fast, at least for one year.
As much as possible to increase the voltage/current reaching the battery: OPPO's fast charge promotion emphasizes "low voltage and high current", which will lead to misleading: it feels like saying that it is fast enough for two factions, one is to improve the current pie, and the other is to improve The voltage is the same. In fact, we can simply regard the battery as a combination of a series of resistors and capacitors. At any time, the voltage is a single-valued function of the current, which is one-to-one.
The two technical routes on the charging device side, so what is OPPO's so-called "low voltage and high current"? Not necessarily, it is just a slogan in marketing. We have all learned Joule's law, heating power = square of current * resistance. When charging quickly, the heating power will be too large, and the interfaces on both the charging and charging lines will not be able to withstand. How can we reduce the heating power? In order to solve this problem, the technical route is divided into two factions:
1) Drop resistance pie: It is OPPO's VOOC technology. The general idea is to thicken the charging cable and expand the charging cable line from ordinary 4-pin or 5-pin to 7-pin. The line is thicker, the cross-sectional area is increased, the resistance is reduced, and the amount of heat is reduced.
2) Current reduction: Charging power = current * voltage, if you want to reduce the current, then you need to raise the voltage. After the voltage is raised at the charging head, the mobile phone integrated circuit is further lowered and charged to the battery. This is consistent with the idea of â€‹â€‹â€œUHVâ€ transmission engineering in our country, which is Qualcomm's Quick Charge or MTK PEP.
From the perspective of voltage, compare the traditional slow charge and fall resistance fast charge technology with the current reduction fast charge technology, as shown in the figure below. 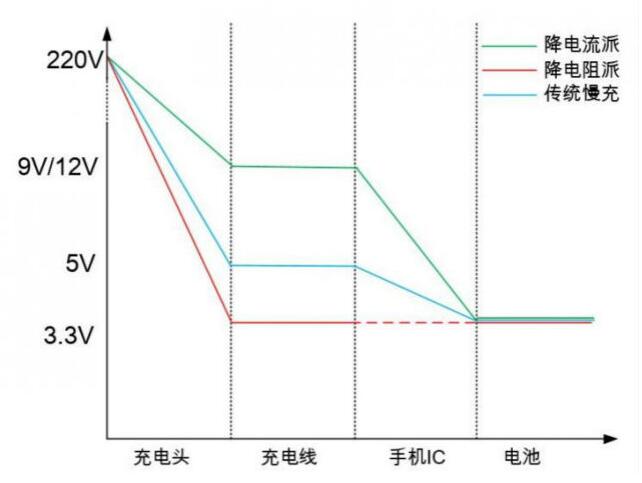 OPPO's VOOC interface is not compatible with USB Type C, which means that this maverick charging technology, charging head, charging line, charging interface can not reduce the cost through scale. Then, when the USB Type C interface's current-saving fast charging technology is also popular, can OPPO not afford to give up its own VOOC technology?
Why is the fast charge of the charging device only progressing rapidly until recently?
Through the above analysis, we can find that fast charging is not a great technology. In essence, the battery has not made any progress, but the manufacturers began to work hard on the charging device and began to tap the potential. So the question is coming, why is it now, not a few years ago? I think there are three reasons:
1. The competition in the mobile phone market is fierce <br> For each manufacturer, the domestic mobile phone market is no longer growing rapidly. If you want to maintain the original share, you must differentiate the brand and function. What VR function and 3D scanning function are estimated to be added to the mobile phone function within a few years. For a fast-charging function that is relatively just needed, manufacturers will naturally not let go. Maybe after a year or two, this will become a standard feature of mobile phones.
2, battery manufacturers' battery quality tends to be stable <br> Notebooks and mobile phones have spawned the first spring of lithium batteries, performance and cost have reached commercial level. The photovoltaic industry and the electric vehicle industry have raised the industrial status of lithium batteries to a higher level, cultivating a group of battery manufacturers with certain technical level and manufacturing level, which stand out from the mixed state of stagnation and savage growth. The battery quality of these battery factories tends to be stable, safety and consistency are better, and battery supervision is becoming stricter. This has become the basic condition for the development of fast charging technology.
That is to say, in the state of mixed fish and dragons, there is no mobile phone manufacturer willing to risk the explosion to mass-produce fast charging technology, which is not worth the candle.
3, mobile phone manufacturers have scale, have a certain research and development strength <br> Smartphone is a big historical opportunity, the old mobile phone manufacturers fell a number: Nokia, Siemens, Sharp and so on. In the rebirth of the fire, a group of domestic mobile phone manufacturers stood up. From the beginning of the "assembly factory" to today, the completion of capital accumulation and the construction of a talent team, with certain research and development strength, this is also the development of fast charge technology basis.
When it comes to domestic mobile phone manufacturers, the first thing that people think of may be "Millet" or "Meizu". Xiaomi is the earliest and most typical. It is gratifying that, by 2016, domestic mobile phone manufacturers with the same size and even more potential as Xiaomi have risen. They also have the strength to independently develop many new technologies. The latest technology may no longer be Apple or Samsung. Instead, Huawei started and OPPO started.
1 time
Window._bd_share_config = { "common": { "bdSnsKey": {}, "bdText": "", "bdMini": "2", "bdMiniList": false, "bdPic": "", "bdStyle": " 0", "bdSize": "24" }, "share": {}, "image": { "viewList": ["qzone", "tsina", "tqq", "renren", "weixin"], "viewText": "Share to:", "viewSize": "16" }, "selectShare": { "bdContainerClass": null, "bdSelectMiniList": ["qzone", "tsina", "tqq", "renren" , "weixin"] } }; with (document) 0[(getElementsByTagName('head')[0] || body).appendChild(createElement('script')).src = 'http://bdimg.share. Baidu.com/static/api/js/share.js?v=89860593.js?cdnversion=' + ~(-new Date() / 36e5)];